Live Pasta counters are the new party rage. Gone are the days when people used to cook for guests or depend on traditional caterers to deliver food home. With the inclusion of a  Live Pasta counter, a party becomes even more hip and happening. The advantage being that visual element added by these counters. 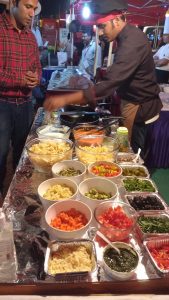 So what makes Live pasta counters special ? The fact that guests can customize their dish according to their whims and fancy. It makes the whole dining experience interactive and lively. The engagement between the chef and guests becomes the main ingredient in the dish. 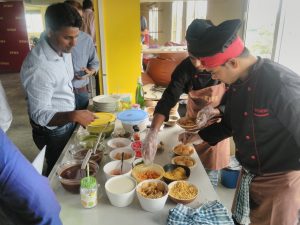 Pasta’s being a kid and adult favourite is a hit live counter in every party, this is because they are highly customizable. You can not only choose the shape and size, you can opt for a sauce and toppings of your choice. Here are a  few ideas for a Pasta live counter to please your guests.

Spaghetti: Long,thin and round strands of boiled noodles made from salted dough are coated in sauce and tossed with vegetables and meat of choice. Kids love it and mostly they are referred to by their Chinese nickname- Noodles. But what makes spaghetti different is that they are made of semolina unlike its wheat/flour Chinese counterpart.

Types of Spaghetti which can be cooked are:

Penne: Penne pasta is cylindrical/tube shaped. The length is usually about 1 ½ inch, the par boiled penne is tossed into a pan which already has a cooked sauce, a few vegetables and seasonings are added and it is cooked over a high flame to get coated with the sauce.

The variations you can have in Penne are:

Fusilli: Fusilli are spiral, long and thick. They are shaped like corkscrews. Fusilli are a nice alternative of penne, and many people prefer it because they can hold a little more sauce due to their ridges. Fusilli are generally cooked on a medium to low flame so that the flavour of the sauce amalgamates into the pasta.

The Variations you can have in Fusilli are:

Fettuccine: Fettuccine are ribbon like, they are a wider spaghetti of which the dough is made with flour and eggs,  they are cooked till al dente i.e. par boiled and then cooked in a pan with olive oil and sauces. The fettuccine are usually served with in Alfredo/ White sauce but another version with zucchini and red Peppers is also quite popular.

Pasta effortlessly combines all Italian herbs like oregano, rosemary, parsley, thyme and vegetables of your choice like Bell Peppers, Zucchini, Olives, Mushrooms, Jalapenos, Broccoli etc. Pasta is one dish that never fails to impress the guests, which is why it is the choice at many parties.

Ramadan Special 2017: An Iftaar Party Menu to Awe your Guests

Organic Continental vs Organic Indian: What did our patrons like?